The L- Bracket has been machined from solid Aluminium T6061 block and black anodized for scratch resistant finish. The main feature of this L-Bracket is its two piece design; the vertical piece of the L-Bracket can be extended to allow cable connection (cable connections are also possible without extending)

Exceptional quality and craftsmanship vertical attachment for the compatible bracket plate of the Nikon D850. Easy to use and intuitive assembly. Comes with proprietary screws, Allen key wrenches, drawstring carry bag and User Guide. This Made In The USA custom plate with attached L-Bracket's finish is of high quality and is a customized fit to my D850 body, which eliminates twisting & allows quick orientation from horizontal to vertical positioning when it's quickly needed. The plate & L-bracket's finish is beautiful and mechanisms are fully functional. It's lightweight yet strong and fits my Nikon D850 and Arca Swiss compatible ball head perfectly. Recommended. 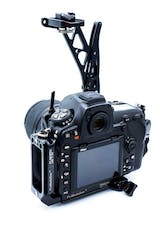 One of the two objects has signs of use, scratch and damaged paint. Really very expensive for a non-new product. That's too bad!

I have the D850, love the camera, bought the cam ranger 2, love that as well. I couldn't use any of my L brackets and shoot portrait until i found this. Great little slider allows me to plug the tether in and easily rotate the camera during the shoot. Well made, solid piece.

My D850 L-bracket works really well. Nice design. I especially like the ability to side mount my flash/mic with an additional shoe.

Z
Zack
Well built, but could be better

Iâ€™ll start out by saying that Iâ€™m probably a tough grader. This is without a doubt a sturdy, nicely-machined L-bracket. It is rather bulky, which lends itself well to being a stable platform in most situations. I can go on all day about the positivesâ€”and there are manyâ€”but Iâ€™ll instead mention a few of the things that I think could be further refined. First, the magnetic Allen wrench is difficult to get off of the mount when it is attached to the camera body. The magnet is strong and there isnâ€™t much room at all to get your fingers in there. Second, the slide rails need to be almost perfectly aligned in order to seat properly. They tend to shift a bit more than I would think necessary when you tighten them down. Lastly, The bracket has a slight amount of play between the two pieces when the camera is set in the vertical (portrait) position with a large lens such as 14-24 with filter installed. While it is stable enough for most situations, the fact that it is the only area with any play in my whole set-up is somewhat disconcerting. It can seat firmly, but you have jostle the base a bit before tightening down the set screw to get the vertical piece flush with the side of the camera. That said, I combed through numerous different L-bracket models from different manufacturers and found this one to the best all-around for the D-850. Again, great modular design but it could be a little better.